I reproduce here the International Appeal of the Association of Greek Archaeologists in support of the proper protection of the Greek Cultural Heritage against the cuts required by the IMF and forced by the Greek government.


You may read the appeal below and visit the following links on Facebook and in the home-page of the Association of Greek Archaeologists.
Feel free to distribute. 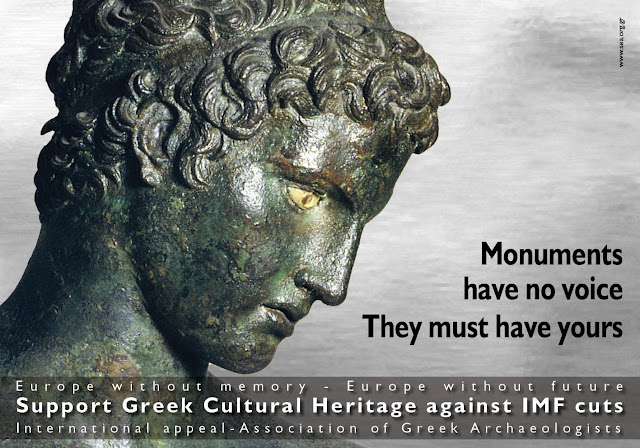 
If monuments had a voice of their own, they would tell us what has been going on in Greece in the past two years. In the name of the global economic crisis and with the IMF acting as a Trojan Horse, austerity measures have been undermining public services, welfare State and social cohesion. Democracy and national dignity are under attack.

Monuments have no voice, they have us.
We, the 950 Greek Archaeologists, civil servants working in the Hellenic Ministry of Culture, are fighting against the destruction of both our country and our cultural heritage, because of the policies dictated by the IMF and the Troika.


The Greek Archaeological Service is not overstuffed, nor are we being overpaid. We serve in order to protect our cultural heritage and monuments, all over Greece, facing constant lack of funding and personnel, dedicated to the pursuit of scientific knowledge and to access to culture as a public good. Our scientific work has won international recognition. For more than 170 years we have been organizing excavations, studying Greek civilization, organizing Museums not with stolen antiquities but with well-documented exhibits, restoring monuments, organizing educational programs and helping bringing together Ancient culture and modern art.


As civil servants we have neither sought after luxury or over-spending, nor have we been accused of corruption, in sharp contrast the practices of the government and the political system that today promises to “save our country”.


As archaeologists in the land that inherited democracy to the world we are perfectly aware of the dangers associated with the suppression of democracy. We are struggling to preserve the memory and the material traces of the past, because we know that a people without memory are condemned to repeat the same mistakes again and again.

Monuments have no voice. They must have yours!
We are making an urgent appeal to our colleagues, to scholars and citizens all over Europe and the whole world, all the people expressing their solidarity and support to the Greek people, to defend cultural heritage and historical memory. The peoples of Europe share the same destiny. The same austerity packages and authoritarian measures, that are currently tearing apart Greece and its monuments, are going to be imposed across Europe. 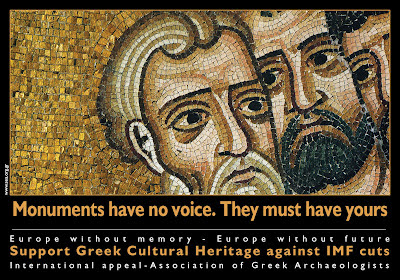 Info
According to the Greek Constitution, Cultural Heritage belongs to the Greek people and its protection is a responsibility of the State. The Archeological Service, as part of the Ministry of Culture, fulfils this responsibility.

Today in Greece there are:


·        66 Ephorates of Antiquities. They deal with the administrative work and the enforcement of the laws dealing with Cultural Heritage (permits for construction works, demands by citizens etc.), the organization and running of archaeological sites and museums, excavations and archaeological surveys, and archaeological scientific research.


·        366 projects co-funded with the European Union, with a total budget of 498 million euros, that are the responsibility of the Archaeological Service


·        Hundreds of excavations that are currently in progress, either in the context of public works or as part of research projects (http://www.yppo.gr/5/g5110.jsp), expanding our knowledge of the ancient world.

All these are the responsibility of just
7000 employees of the Ministry of Culture and Tourism which include 950 archaeologists, civil servants, and 2000 guards and night-guards. Moreover, each year 3500 extra employees are hired on short term contracts.

In November 2011 10% of the total workforce of the Ministry of Culture, that represented the most experienced employees (with more than 33 years of experience) were forced to leave the service and retire, as part of plans to reduce the total number of public sector employees in Greece. Further personnel cuts would mean that the Ministry of Culture will be unable to cover even its basic needs.

The personnel of the Greek Archaeological Service for many decades have been working with poor means and limited funding
·        Funding for culture in Greece never exceeded 1% of the State budget
·        Net Salaries of archaeologists in 2009 were from 880 (newly appointed) to 1550 euros (after 35 years in the service). In 2012 a newly appointed archaeologist receives 670 euros (after taxes and social security contributions), and we have had a 35% wage reduction
·        In 2011 the budget for the Archaeological service is 12 million euros (with a 35% reduction compared to 2010) and in 2012 we are facing further cuts
·        Despite the burglary in the National Gallery and the armed robbery at the Museum in Olympia on 5 March 2012 the Minister of Culture decided to cut funding for Museum security by 20%

A new law that is going to pass through parliament in the next days, the Greek government is planning personnel cuts of 30-50% at the Ministry of Culture. Damage is going to be irreparable. We must stop them! 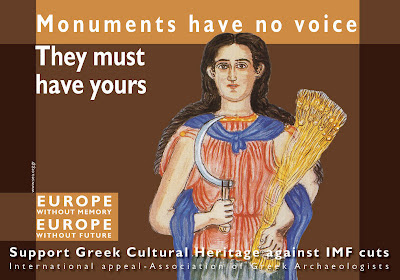 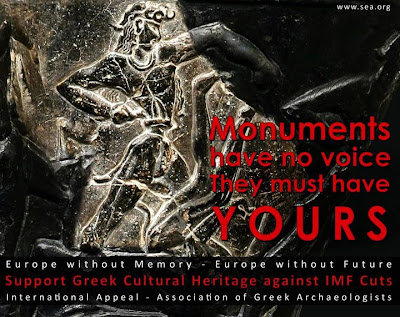 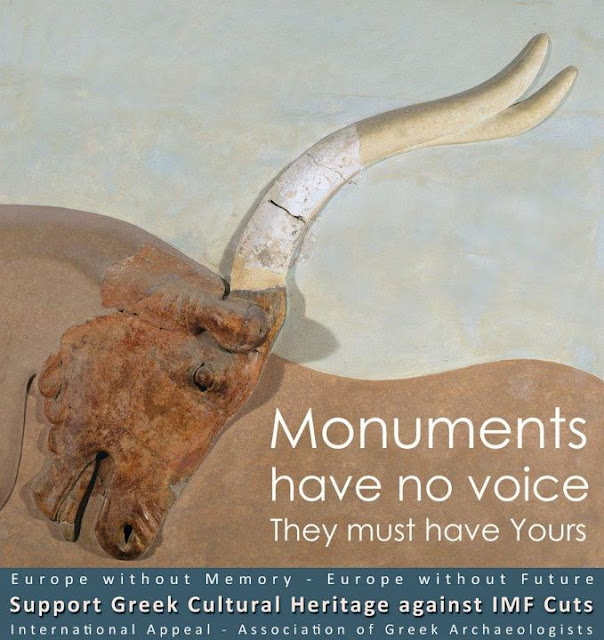 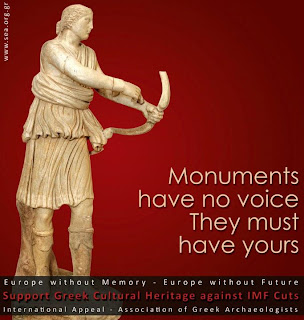 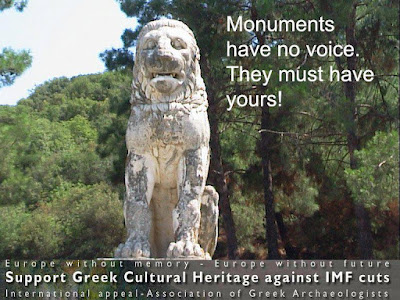 Just as I was reading that the Ministry of Culture did not deem Spyros Louis's silver cup from the first Olympic Games of cultural importance and it is now going to be sold via Christie's. I bet they didn't bat an eyelid either when the robbery in the museum of Ancient Olympia happened. Pretty soon they're going to start selling them themselves because 'the cost of maintenance is too high' or something stupid like that.

Thanks for the links, it's something we must spread around.

Don't believe everything you read in the press about Spyros Louis' silver cup. That goes for other matters as well, but anyway.
It is BECAUSE of actions taken by the Ministry of Culture that the cup will not leave Greece.

Responsibility in most cases lies in individual Greek citizens you know. Is it not logical to accuse the Ministry of not being as effective as possible with stolen artefacts or whatever, when it is the very people of Greece doing the illicit excavations and trade.

"Pretty soon they're going to start selling them themselves because 'the cost of maintenance is too high' or something stupid like that."

This is pretty offensive given that you claim that you have read the text of the Archaeologists' appeal. It is these very people that work with dignity to save and protect our country's treasures.

You seem to take offence when none is given. By "they" I most certainly did not mean the archaeologists who are trying to do a decent job under such difficult and uncertain circumstances, but our politicians who never fail to disappoint.

As for the Louis cup, it was thus reported in a Greek newspaper, that the Ministry did not wish to make any offer to buy it as it was not of cultural importance. I think it was 'Ta Nea' if memory serves me right, but I could be wrong after all these days; if I find the link for the article on line I will post it. Obviously they did not do a proper job at reporting that which is a pity. I sincerely hope it doesn't leave Greece. Even as a rumour, it was enough to spark intense interest amongst international collectors.

Well then I guess an apology should be offered. It is with great indignation that I listen to false accusations about Greek archaeologists, being myself one for the last 20 years of my life and thus knowing very well how patriotically and selflessly they/we try to do their/our job.