You say he's only a statue 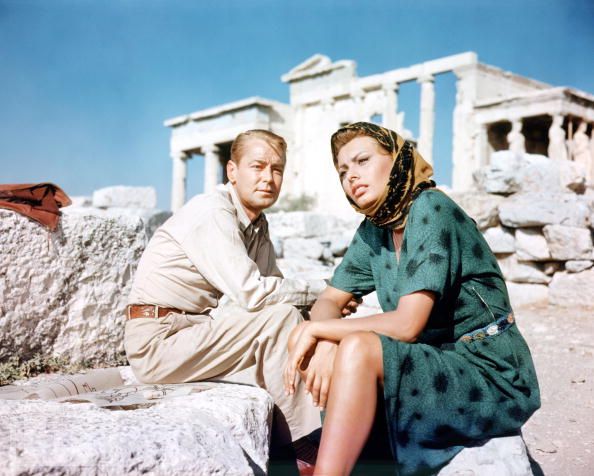 Sophia Loren posing with co-star Alan Ladd in front of the Erechteum in the 1957 film "Boy on a Dophin". 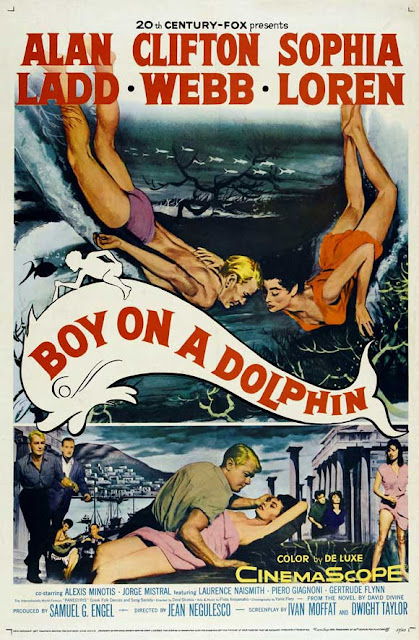 The film's plot revolves around the attempts by two competing individuals - an archaeologist and a wealthy art collector - to retrieve an ancient Greek statue of a boy riding a dolphin from the bottom of the Aegean Sea. Alan Ladd portrays the honest academic archaeologist, Dr. James Calder, whose aim is to see to it that the statue is handed over to the rightful Greek authorities. Clifton Webb on the other hand, plays a rich and unscrupulous grave-robber, Victor Parmalee, who wants to find the statue and keep it in his own private collection. Sophia Loren plays a Greek sponge diver, Phaedra, who accidentally found the statue and is trying to make money by assisting Webb's character, but gets romantically involved with Ladd's character. 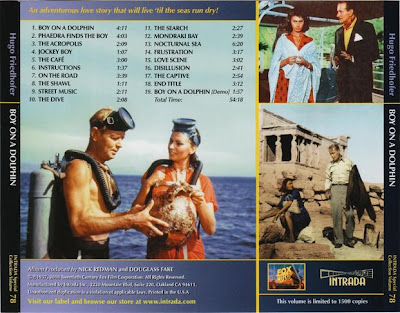 The film score cover (more on the film music HERE)
The statue of the Boy on a Dolphin in the film supposedly granted wishes and the english lyrics of song of the film refer to this special quality (the Greek version of the song is a completely different story).

There's a tale that they tell of a dolphin
And a boy made of gold.
With the shells and the pearls in the deep,
He has lain many years fast asleep;
What they tell of the Boy on A Dolphin,
Who can say if it's true.
Should he rise from the depths of the ocean,
Any wish that you wish will come true.

You say he's only a statue,
And what can a statue achieve.
And yet while I'm gazing at you,
My heart tells my head to believe.
If the boy whom the Gods have enchanted,
Should arise from the sea,
And the wish of my heart could be granted,
I would wish that you loved only me.

The film was shot at Cinecittà, Rome, and on the Greek island of Hydra, but a scene was also shot on the Acropolis, probably to establish a suitable internationally recognisable archaeological background. 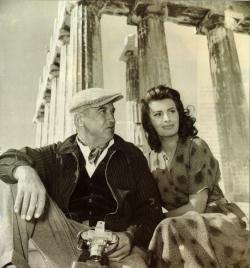 Sophia Loren and director Jean Negulesco on the Acropolis, during the film
[More on the film HERE] 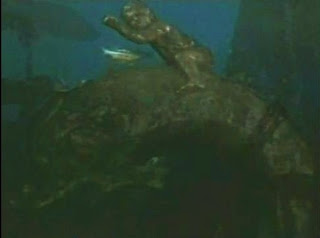 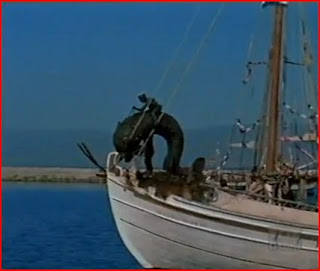 Two screen shots of the statue starring in the film.

In my humble opinion, it's not the same statue in both cases. Among other differences, note that on the underwater shot the boy recalls the Artemision jockey posture, and on the ship the dolphin seems to have a much more arched back.

On the Acropolis scene, Phaedra (S. Loren) and archaeologist Jim Calder (A. Ladd) ponder on a sketch of the bronze complex - quite different from the actual find, showing two dolphins. 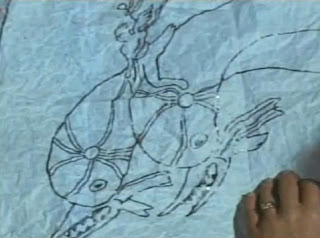 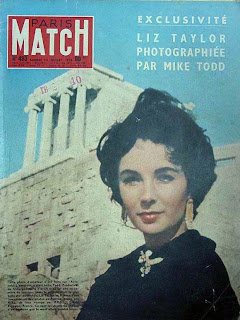 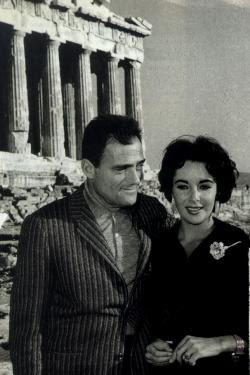 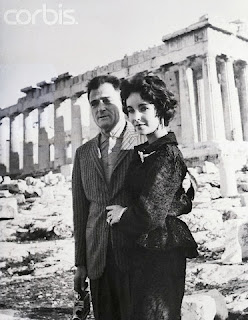 Taylor had married Todd a year ago, in February 2, 1957.
Only a month after these photographs were taken, Todd died tragically in a plane crash.

Stelios Koudounaris is a Cypriot fashion designer who uses an ancient motif as his main logo. 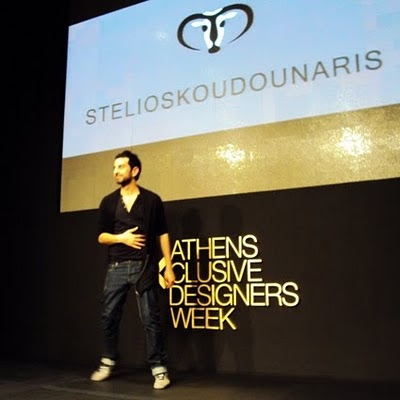 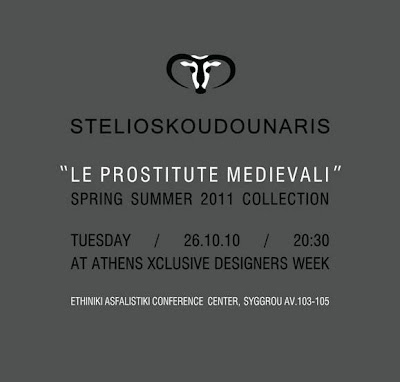 The motif is portrayed on a silver cup with a wish-bone handle, with inlaid decoration. The cup, was found in a tomb in Enkomi, Cyprus, and was probably imported from Mycenaean Greece, dating from the 14th c. B.C. It is currently in exhibit in the Cyprus Museum at Nicosia. 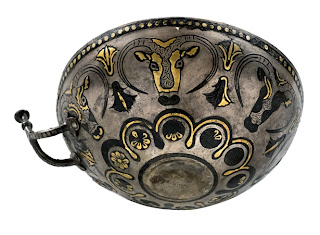 Koudounaris' webpage [HERE] includes a short bio as well as an extremelly interesting comment on why the designer whose this particular image as an emblem of his creative work.


Stelios Koudounaris was born in Cyprus in 1981 and raised in a family fashion business. After studying Fashion Design and Garment Manufacture he moved to Athens and worked for some leading Greek fashion business as a fashion designer and stylist.
He is now presenting his 8th running personal collection for autumn/winter 2011-12 under his own label, called after him ''STELIOSKOUDOUNARIS''.

Since his very first collection, Stelios Koudounaris plays a leading role in Greek fashion system. International magazines like Harpers Bazaar, Madame Figaro, InStyle and more have presented his work for several times, while Greek souperstars choose his creations for their appearances.

Cyprus mufflon is used as his main logo, which is a statement traditional figure given a modern twist in order to explore his designs' sharp shaped pattern cutting and dynamics and slightly declare the designers'origin.

His collections are mainly driven by some rock and wild elegance always worked in such a way to elect a womans' body. His minimal approach to female sexiness evolves through a mixture of razor-cut clear designs and futuristic mood.

His making is mainly adapting couture like techniques to his pret-a-porter creations that are aesthetically perseverance in now-a-days.

"STELIOSKOUDOUNARIS" collections are exclusively manufactured in Greece and distributed in 40 selected selling points alongside Austria, Denmark, Poland, Greece and Cyprus.

It is of note though, that what Koudounaris interprets as a "Cyprus mufflon", is a well-known motif in Aegean art unanimously accepted in literature as a bull's head...

A price for everything 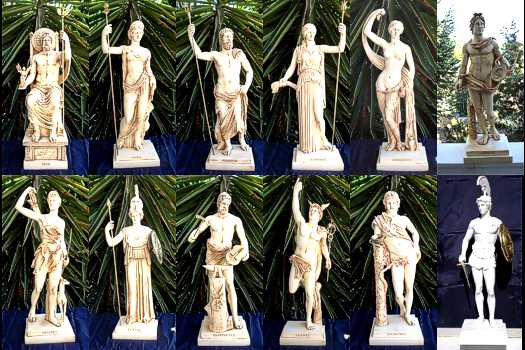 Ever wondered how much the entire Dodecatheon would be worth?

And before you make an educated guess, did you get to appreciate all the fine details? 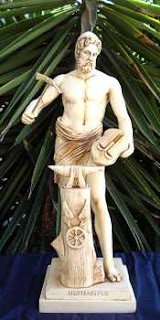 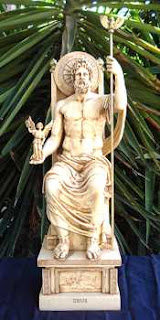 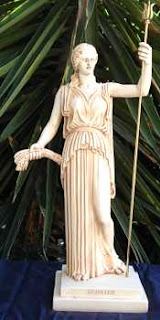 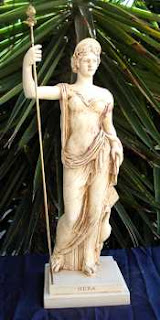 
Well, you can buy this beautiful collection of 12 alabaster stone statues representing all 12 Olympian Gods for just 3,393 $ and save 1,074 $ 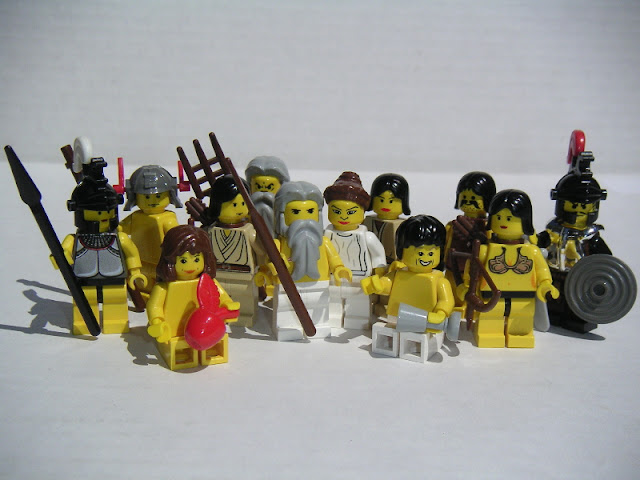 ******
Want more photographs of Legolympians?
Check out HERE and HERE 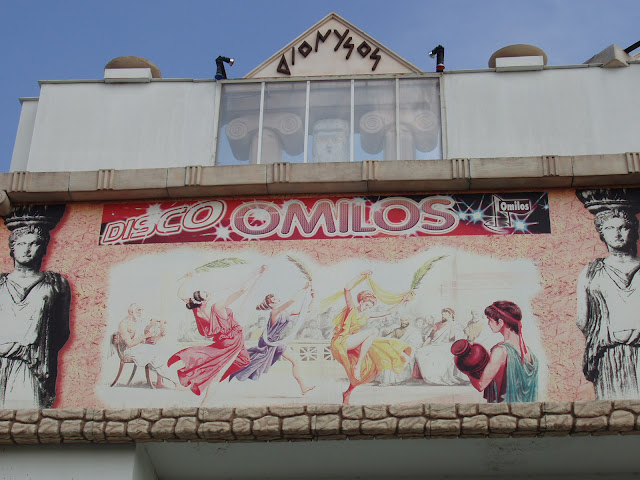 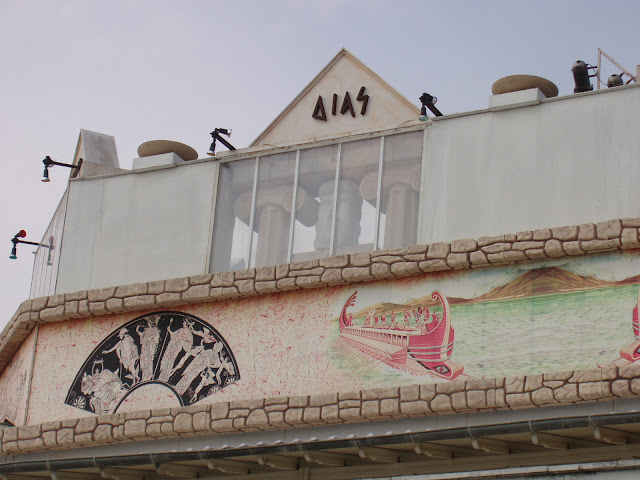 close-up photographs from my personal archive 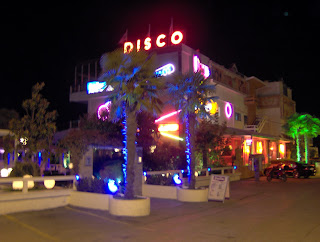 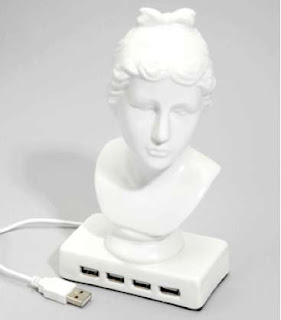 Greek goddess of love, beauty & convenience? We're not sure if that was her exact title, but it is now! This mini sculpture will bring elegance and class to your workspace and with the 4 port USB hub as the base, you'll be able to accomplish anything. The statuesque bust is made of ceramic with a slip resistant base. 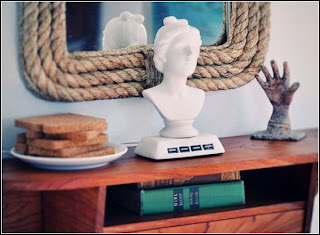 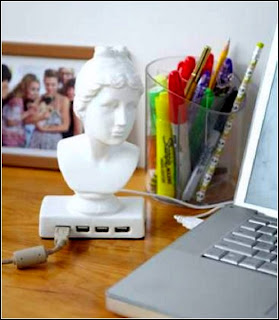