It's been a while since I uploaded a new post in the blog and it was about time to continue and add all the new material I have been collecting myself and through generous friends.

This new relaunching will be properly celebrated with a sort of philosophical approach.

The famous Greek poet O. Elytis in his work "Little Nautilus" said that if you deconstruct Greece, what you have left is an olive tree, a vine and a boat. Which means that this is pretty much what it takes should you want to construct it.

Well, it seems that this kind of minimal approach was obviously in the mind of an artist/decorator who undertook the Herculean task to "construct" Crete and Rhodes with minimum means.

This summer I visited a mall in Athens and came across this wonderful installation supposed to represent Crete. For those of you who can't speak Greek the sign says "Welcome to Crete"  - a rather strange welcome when you're so obviously in Athens. 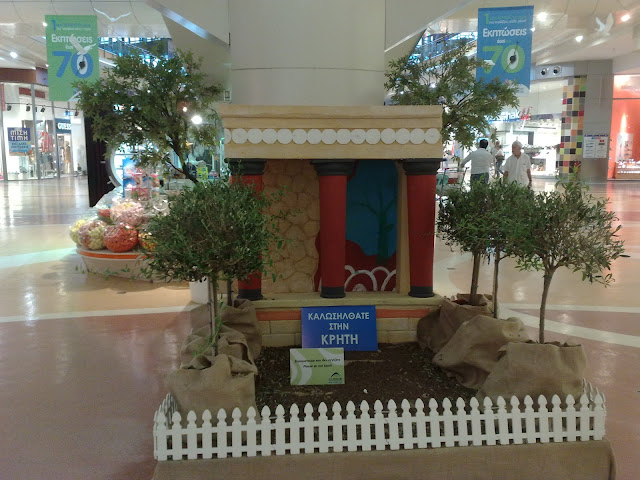 Anyway, I was totally blown away by the efficient way Crete was symbolised: the Knossos North Propylon, made of polystyrene, featuring as a modest stoa with three Minoan columns and only part of the bull fresco (actually not the bull but the tree), a few plastic olive trees and some soil surrounded by a low wooden white fence.

This is evidently all it takes to denote Crete in any setting.
Knossos North Propylon + olive trees = Crete. Makes you think, right? 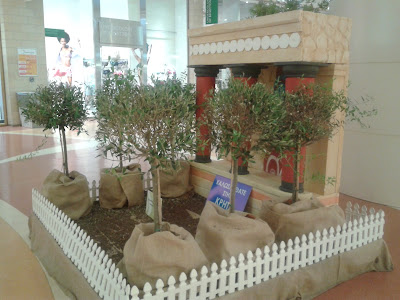 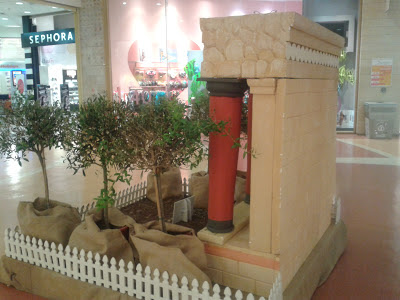 ***
I wrote in the beginning that in the same mall there was also a composition for Rhodes and though there is no strict reference to ancient Greece, I shall post it here as well. 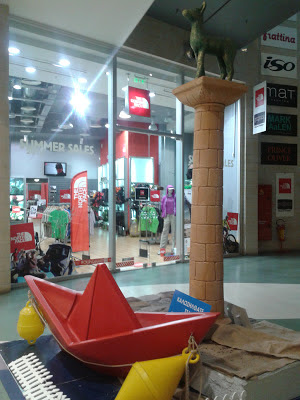 It presents the well-known and much photographed column with a statue of a female deer from the port of Mandraki in Rhodes. In reality there is also a second column with a male deer and both columns supposedly lie on the spots where the giant statue of Colossus rested his legs in antiquity. In the mall composition there is a small plastic boat in front of the polysterene column to denote the Mandraki port.

One final note: The mall in question lies on Kifissias avenue, far from any tourist attraction, other than the Athens Olympic stadium (does this count?) or any large hotels nearby. So I actually wonder what the purpose of this curious advertisement was.
στις 9:32 π.μ.