The Caryatids of St Pancras 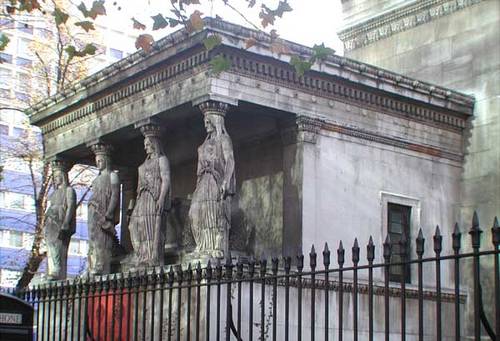 The Caryatid Porch of the St Pancras Parish Church London

In 1818 the Trustees [of the St Pancras Parish Church] bought a site on the Euston Road from the Southampton Estate, and invited suggestions for the design of the new church.  Thirty entries were received, and the first premium was awarded to the local architect William Inwood and his son Henry.

The foundation stone of the new church (in the crypt) was laid with much pomp on 1st July 1819 by Frederick, Duke of York and Albany. 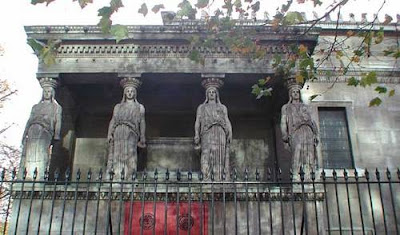 The New Church was consecrated for the worship of God on 7th May 1822, by the Bishop of London, William Howley.  The total cost was £89,296, making St Pancras the most expensive church to be built in London since the rebuilding of St Paul's Cathedral.  The inspiration for the design of the church is the Ionic Temple of the Erectheum on the Acropolis.  Its main feature, the caryatid porch, is here used for the two vestries which guard the entrance to the burial vaults. 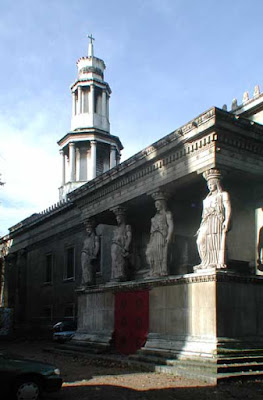 The tower is a copy, much enlarged, of the 'Tower of the Winds', the water clock of Andronicus Cyrrhestes.
The church is built of brick, faced with Portland stone, originally white but, in spite of cleaning, now darkened by years of London pollution.

The rich ornamentation is in terra-cotta, as are the caryatids by Rossi, built up in sections around cast-iron columns.  The St Pancras figures lack the grace of the originals (one of which is in the British Museum).  Due to an error they were made too high and had to be truncated at the waist. 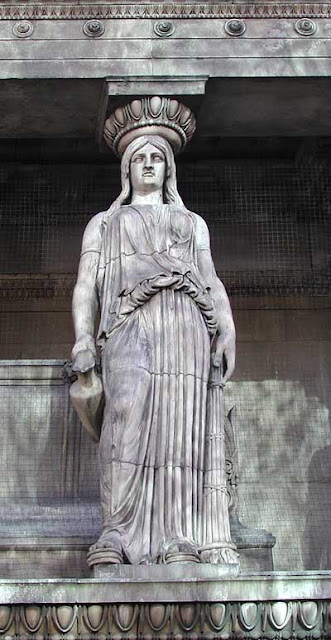 The caryatids guard the entrance to the crypt.  This was used in two world wars as an air-raid shelter but its designed purpose had been a burial vault.
When the new St Pancras cemetery was opened in 1854 the crypt was closed, by which time 476 burials had been recorded.  In 1838 the cost of a private vault was £110. 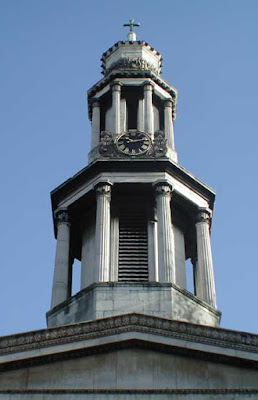 The tower was originally surmounted by a Corinthian finial carrying the cross.  This became dangerous and was replaced with a simpler design in 1953.
The tower contains a ring of eight bells hung for chiming.

All information and photographs are drawn from the church's site HERE.
﻿
στις 6:47 μ.μ.